Mrs. Berker called again yesterday. This time with profuse thanks for a suggestion I’d made earlier. She went on and on, raving about the amazing difference it made. She called it a miracle drug. I hate to be a killjoy ma’am, but the only miracle drugs out there are the ones that still cost the same as last year. I just relayed a tidbit that’s brought relief to many of our other clients’ pets.

Mrs. Berker had been treating her Maltese, Cloe, for a dandy of a case of Demodex. After following the Mite Avenge® Six Steps to Beating Demodectic Mange program for a little over a month, Cloe was almost clear of symptoms. Almost.

The holdout symptom was the infernal Demodectic Itch. Cloe looked great otherwise, but her itching was worse than ever. She scratched frantically night and day. Neither dog nor family was getting much sleep and the puppy was beginning to chew holes into her skin.

As Mrs. Berker and I were troubleshooting, my gut kept poking me. When I finally paid attention, a quieter, smarter part of me suggested that we might be over-thinking things. This wasn’t a complication or new problem. This sounded exactly like a garden-variety itch cycle that had spiraled out of control. The itch cycle phenomenon is something I’ve written about before. If you’ve ready read that post, you know that an itch cycle is a self-perpetuating itch that spreads more fiery itchiness with every scratch or lick. An itch cycle is crazy-hard to break because dogs have an endless supply of the stuff that keeps it going.

An itch cycle is both an external and an internal problem. You’ve got to deal with both areas to find meaningful relief. I’ve seen the following 2-step trick help many an itchy dog.

Am I hearing you say, “Hey — antihistamines are drugs! Isn’t that risky? What about toxicity?” Not to worry my friend. If there’s one thing vets can agree on, it’s that human antihistamines are perfectly dog safe and don’t seem to have a downside.

Antihistamines offer some compelling benefits for a mite-ridden pooch. They quell itching caused by histamine reactions to mite toxins, yeast, mite feces, allergens, etc. They also help stabilize the immune system and lower the risk of flare-ups triggered by allergies. Unlike many drugs, an antihistamine can’t be overdosed and does not suppress the immune system. Vets call them benign drugs because they are essentially harmless.

Here’s how safe they are:

Years back, our founding dog Belle got bitten by something that had her looking more and more like a space alien by the second. I gave her a bunch of Benadryl and called my vet. He laughed and said I’d given her 600% more than I should have but not to worry about it. He was right. Besides sleeping a lot that afternoon she was just fine.

Histamines are made by the immune system. These chemicals are like bouncers at a club. They help rid the body of something bothersome – in most cases, an allergy trigger, or “allergen.”

Histamines try to evict the trigger from the body or off the skin — typically through sneezing, tearing up, itching, or a variety of inflammatory responses. They are part of your body’s defense system.

When mites over run a dog, it’s immune system sees them (their toxins, the yeast they farm and all the ensuing wastes and detritus) as a threat and reacts. It’s no wonder mange is so often misdiagnosed as an allergy. Histamine over-reaction can leave your dog an itchy mess.

What you need to know

Six types of OTC antihistamine are known to be canine-safe: 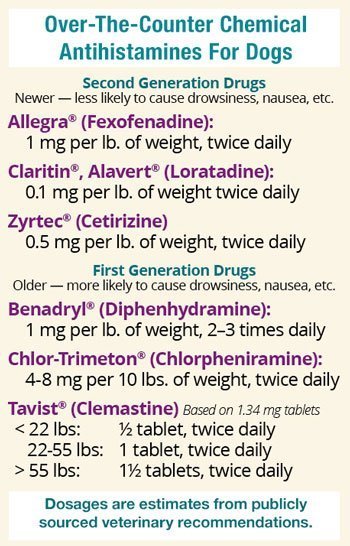 When selecting one, be sure to follow these caveats: