There’s an assumption that cost is an indicator of quality. While it’s true that good dog food doesn’t come cheap, there’s no guarantee that pricey dog foods marketed as “premium” dog food or “all natural” are what they say they are. Ongoing allegations against Blue Buffalo and other dog foods are a good case in point. 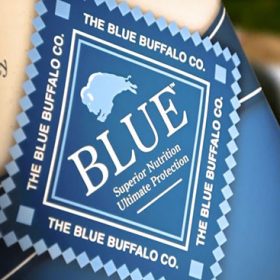 Blue Buffalo dog food is currently being sued in Federal court. The manufacturer is being accused of falsely advertising that its products contain “only the finest natural ingredients” and “no chicken or poultry byproduct meals” and are in violation the Federal Lanham Act.

Steven Crimmins, Vice President and Chief Marketing Officer of Nestlé Purina, said in a statement. “This is not an action we take lightly, we believe consumers deserve honesty when it comes to the ingredients in the food they choose to feed their pets.”

Additionally, it was alleged that products advertised as grain-free were found to contain rice hulls.

The false advertising claim is serious because Blue Buffalo dog food spent close to $50 million last year advertising that its ingredients were superior to competitors.

“With tens of millions of dollars in advertising and a small army of in-store marketers, Blue Buffalo has built a brand targeted at ingredient-conscious pet owners,” the complaint states. “It has become increasingly clear, however, that Blue Buffalo’s brand is built instead on a platform of dishonesty and deception.”

A number of customers claim that Blue Buffalo caused problems for their pets. That’s not to say that there aren’t loads of happy customers, but I can tell you from experience that people bellyache when they’re unhappy but remain quiet when they’re content. (In our case, less than 1% of our customers get in touch and that’s because they’re really moved by their pet’s recovery.) We found plenty of consumer comments on Blue Buffalo but clearly; we can’t verify their claims.

One thing we found interesting when reading dog food reviews was that Blue Buffalo doesn’t like people saying negative things about its practices. A few years back a blogger reported that the company was using menadione – a questionable substance that’s actually banned in the UK. They threatened the blogger and several other sites about placing the information on pages that also discuss recalls. They didn’t deny the claims; they just tried to silence them. Again, we have no way to verify them, but the comments at the end of this article are scary.

While researching, I also stumbled upon several sites filled with unhappy comments from Nutro, Science Diet, Beneful, Pedigree, Iams and Hills customers. I had to quit looking.

It all goes to show that it’s buyer beware. What to feed is a bewildering decision. The endless recall epidemic and sketchy practices of big pet food companies make me wonder what’s safe to give my babies. (Did you know Blue Buffalo has gotten so big that they’re about to go public with an IPO and the rumor mill says they’re pumping the company up for a possible sale?)

The more I research, I realize there’s so much out there that I don’t know and what I do know scares the bejeesus out of me. I do know that I wouldn’t be healthy if I ate processed food or mass-produced restraint meals full of God-knows-what. And despite feeding what I believe is the best brand available for my dogs, that’s exactly what I’m doing by giving them highly processed food with ingredients that I don’t exactly understand.

[Update July 11th 2017] Here’s an independent lab that tests commercial dog food. It’s a great resource if you have to feed kibble or freeze dried food. Check it out – Dog Food Advisor