Dog food is a huge business.

And I mean huge.

Any industry that relies on lawyers that defend repeated claims of carcinogens and health hazards, lobbyists, high profile advertising campaigns, expensive product promotions and giveaways and aggressive PR efforts should be regarded with caution. All that energy and expense isn’t being spent for the benefit of the consumer. It’s purely profit driven. The industry I’m describing isn’t one that commonly comes to mind when you think about profiteering hijinks but if you knew the behind-the-scenes scoop on what’s in many brands of dog food, you’d never feed it to your beloved pet again. While a dog that’s fed heavily processed mainstream commercial food may appear healthy, she’s not at her best. And long term, your pet’s ability to stay healthy is at risk. Here’s why:

They may tell you it’s this, but it’s really that.

The pet food can or bag that shows a real chicken, cow or a prime piece of meat shouldn’t be taken at face value. What’s inside most likely isn’t quality meat. It’s recycled animal parts left over from other food production. Mainstream dog food is actually meatless animal and poultry carcasses, feathers, beaks, heads, hooves, junky waste from crops such as the husks, cobs, and stalks left over from processing corn and grains, old restaurant grease and much more. Just because it says beef doesn’t mean it contains the kind of meat you imagine in your mind. But they’re still allowed to call it beef. Same goes for the other ingredients. 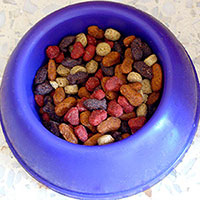 The by-product ingredients, bones and other hard nasties are pulverized into powders. Some are dissolved with acids. The product may be further processed into ash. Bleaching agents are often used to halt or eliminate the smell of decay. Moist materials are dehydrated, while feathers and other hard-to-breakdown by-products are hydrolyzed by using heated sulfuric acid under tremendous pressure to dissolve and break them down into base sugars. Basically, they’re creating a digestible ingredient from something previously inedible that should have stayed that way. The materials are blended together with hot water or steam and the mixture is compacted through intense pressurization and heat. All of this destroys any nutritional value in the garbage they started with. Then the mixture is extruded and shaped rapidly into individual pieces and force dried at heats that break down enzymes. This is usually sprayed with oils, flavorings, preservatives or other chemical additives, then dried for packaging. Moist food follows a different process but uses the same basic ingredients and damaging practices except for drying.

Pet food provides a convenient way to turn slaughterhouse offal, grains considered “unfit for human consumption,” and similar waste products into profit. This includes intestines, udders, heads, hooves, and possibly diseased and cancerous animal parts. The National Renderer’s Association, the industry lobby that supports such processing, says: “Approximately 50 percent of every animal used for human consumption is inedible and must be dealt with in order for the cycle to continue. Also, fallen animals must be removed from the environment in a safe and acceptable manner. Total volumes of inedible raw materials from animal production are enormous.” Wow! Would you eat that?

Mass pet food manufacturers represent themselves as caring and conscientious providers of complete and balanced nutrition for our pets, despite many indications to the contrary. Really? Just three major companies produce the majority of private label pet food and dozens of brand names. They have all been involved in pet food recalls that sickened or killed many pets. Some major pet food makers are not primarily known for pet care but they keep our grocery stores stocked with well-marketed brands. For example, Proctor and Gamble owns Iams & Eukanuba. Colgate-Palmolive owns Hill’s Science Diet, Prescription Diets & Nature’s Best. Del Monte just bought Natural Balance. Many of these same companies’ other products use ingredients derived from animal by-products and so it stands to reason they’d find something to do with the remaining (even nastier) stuff left over. These organizations answer to profit-driven stockholders. I’m not sure your pet is really one of their top priorities. However marketing to you is. And don’t get me started on the gibberish on the labels.

If That’s Not Scary Enough…

It has long been rumored that the by products used in the pet food industry contained dead dogs, cats and roadkill. (Remember that quote about fallen animals? They didn’t restrict that to dead or diseased livestock.) Because of these persistent rumors, the FDA conducted a study looking for pentobarbital, the most common euthanasia drug, in pet foods. They found it. Although there are still no laws or regulations against it, industry insiders admit that pets and roadkill were used in pet food some years ago but suggest the practice is uncommon today. What’s really disgusting is that so-called “4D” animals — dead, dying, diseased, disabled — are legitimate ingredients for pet food. These are banned for human consumption but they’re still legal and commonly used in pet food and animal feed.

Also, the ingredients used in pet food are often highly contaminated with a wide variety of toxic substances. If you’re not feeding raw, homemade or a good quality natural pet food you may well be feeding your pet “4D” animals (dead, dying, diseased, disabled) as well as feathers, husks, rancid fats, fillers, bacteria, GMOs, mold, fungi and a host of other things you’d never put in your own mouth.

No dog should have to eat such things. Diet’s containing such ingredients can cause or contribute to mange and other health problems. They also keep Demodectic mites happy healthy while contributing to the immunosuppression that keeps the mange from going away. With either Demodex or Sarcoptic mites, crummy dog food will undoubtedly hold your pet back from healing like she would if she was fed well.

Pet owners want convenient and affordable food for their pets and the pet food industry readily satisfy the demand. We are getting what we asked for, but unfortunately, a discrepancy often exists between what we are told we are getting and what we actually get.

Even if you’re purchasing what you believe to be a premium dog food, please look into what’s in it. It may contain waste products that have been rendered useful by profit-driven businesses where safety and quality have been known to suffer.

There are plenty of resources online where you can find out for yourself what’s in your pet’s dinner bowl. We recommend Dog Food Advisor. Within this site, we recommend three related posts, click on the “Our Dogs and Food” Category in the sidebar.

The more you know, the better you can help your pet.