While we all know that mange is a very common problem for dogs of all shapes, sizes, ages, and states health, many are not aware of the dangers of the most common forms of treatment. Usually chemicals that are not at all healthy, safe, or comfortable are used to treat mange. Even though veterinary science considers them safe to an extent; they can still pose a number of health risks because in reality, they are poisons. When treating mange, it is important to consider your dog’s overall health, wellbeing, and comfort. 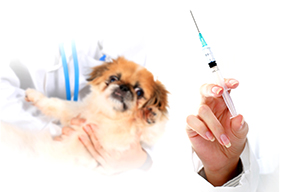 Natural remedies are not as sought after as chemical treatments, partly because of a lack of awareness of their effectiveness, misplaced stigmas or biases and a lack of support from the mainstream pet industry.

Mange is caused by several types microscopic parasite: primarily Demodex and Sarcoptic mites. Many pet owners are not aware that such a tiny bug (an arachnid actually) can cause this huge problem for their fur friend. And sadly, too many don’t know how simple it is to safely kill off the mites and reverse their effects on their pet with natural mange cures.

The Dangers of Chemical Mange Treatment

Topical chemicals commonly used in the treatment of mange can cause a disturbing variety of adverse problems. They are highly irritating to healthy skin; and even more irritating for already inflamed, infected, or wounded skin. This can leave your dog in pain. Dogs are also subjected to adverse allergic reactions, especially around the facial area. Chemicals are often not suitable for puppies, meaning you will need to seek alternative treatment.

Ivermectin, the most popular internal chemical, has its own baggage. The most common side effects of this drug include vomiting, diarrhea, lack of appetite and lethargy. Ivermectin has also been associated with a central nervous system reaction that leads to loss of coordination, seizures, and in some cases, death.

Ivermectin is a drug designed for use on cattle and swine that is sometimes used to treat parasites in dogs. It is FDA approved in small doses as a heartworm preventive in significantly lower than doses used for other purposes. All other uses of the drug including treating mange are considered off-label. Sometimes the dosage can be as much as 50 times greater than the dose in its FDA approved use for heartworm prevention.

And no dog should have Ivermectin administered without first being tested for heartworms. Dog already invaded by heartworms can have serious reactions to the medication including a fatal side effect characterized by symptoms of shock including vomiting, hypothermia and depression. Certain breeds should also be tested for a mutation of the multi-drug resistant gene (MDR1). The mutation can cause serious, sometimes fatal, reactions to some drugs, Ivermectin among them.

Natural remedies are not only safer, but much more comfortable for your pet. They don’t pose the serious health risks that chemical treatments do and they compliment your pet’s system instead of working against it. Natural ingredients are safe for dogs of all ages, and are also more suitable for dogs with sensitive skin. And natural ingredients often do far more than just treat symptoms.

Mite Avenge® natural mange treatment has powerful antiparisitics plus many other natural ingredients to help with the damage caused by mites. It eases discomfort with natural analgesics, promotes healing, with essential oils that have antibiotic properties, calms and relaxes with soothing herbs, and acts as a natural insect repellent; encouraging the mites to pack their bags and take a hike.

Despite overwhelming evidence that natural medicine is effective, chemical and pharmaceuticals are usually the first place people turn to when things go wrong.