Skip to content
[Updated July 12 2017] The information that follows is also true for Cheyletiella mites which are most commonly spread by rabbits.

Sarcoptes scabiei is the type of mite responsible for Sarcoptic mange and scabies is incredibly contagious.

Typically, pet dogs that contract Sarcoptic mange or Cheyletiella mange were simply in the wrong place, at the wrong time. 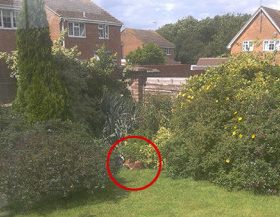 Most people are aware that contagious mites are easily transmitted by contact with an animal or human carrier. Something most people don’t know is that these parasites can be transmitted by wildlife. The wide variety of wildlife that can spread Sarcoptic and Cheyletiella mites includes species commonly found in urban areas like foxes, coyotes, squirrels, rabbits and raccoons.

If an infested animal — let’s say a raccoon — moseyed through your yard and paused to scratch or rest, it wouldn’t be unusual if a few mites stayed behind after the raccoon moved on. If it left Sarcoptic mites, they can can live for over a week without a host. It they left Cheyletiella as their calling card, they can lay in wait for a meal for 10 days or more. If your dog comes in contact with them, those hungry parasites will be all over your dog like flies at a barbeque. Sarcoptic mange can be transmitted that easily, as can Cheyletiella mange.

An effective deterrent is to sprinkle food grade Diatomaceous Earth in the areas trafficked by wildlife such as the perimeter of the property. Diatomaceous Earth kills insects (even microscopic ones like mites) without damaging the environment or harming animals.

Don’t use pool or agricultural grades because these often contain additives that could harm your pet.